Lunch time in the souk is the opportunity to taste new foods. There was a big queue at the kibbeh place, where an old man and his apprentice were frying the large flat Mosul kibbeh (kibbet al mousil). Like most kibbeh, it is made with burghul and minced meat. But here, a pouch is made with burghul only (unlike the Lebanese-Syrian-Palestinian kibbeh which is made from a blend of meat and burghul) and then filled with fried mince meat with onions and spices and raisins and then the whole thing is deep fried. On top is a picture of the ingredients in the small street shop, and below is a picture of the Mosul kibbeh. I bought some and ate it while strolling in the narrow streets of the old city. 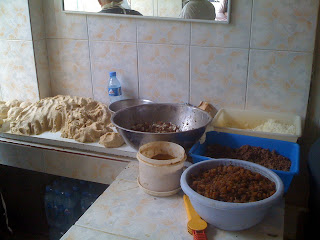 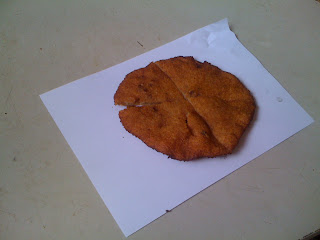 I stopped where I found a queue of people waiting: always a good sign. Next was this tannour where there were making bread in fast forward motion. Excellent stuff. People buy it and step in the next door tiny shop where they order tashreeb lahm, literally "imbibing meat". It is a stew made by boiling pieces of meat with onions, tomatoes, dried lime and sometimes with peppers. Pieces of bread are torn from the loaf and layered in a deep plate and the stew is poured on them. Excellent. 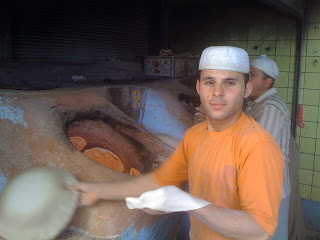 Later in the souk I stopped for kebab at the most famous place: Yasseen Kebab. There are 2 places, distant a few meters from each others, one seems to be exclusively for men and the others for "families". The kebabs are made from a mixture that must contain at least 60% fat and the rest is meat. They are heavy, but very good. They are served with onions, grilled tomatoes and a special bread that looks like tannour bread but I was told is made by a semi-automated process. It is accompanied by a smoked, diluted sheep milk yoghurt with a very interesting taste. I liked it but the other people who were with me didn't. Below: Yasseen Kebab in the making. 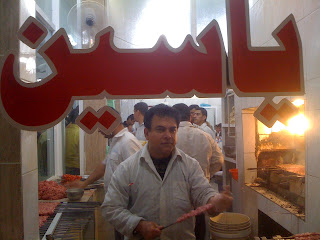