Among all Arab capitals I have visited, I used to like Cairo least. The crowded, the cars, the pollution, the latent aggression of the baltagiyya in the souks, all this used to get me. Today, after the January 25 Revolution, I feel the vibes of this city, and I just love it. The whole place has changed, the attitudes of people in the street have changed, there is a palpable mood of freedom everywhere, from the airport taxi to the public gardens.

I'm here to attend the launch of the World Bank World Development Report titled "Conflict, Security and Development". Let me spell out clearly that my participation does not constitute an endorsement of the World Bank, of its policies or or the report. I will have much more to say about the report at the end of the meeting. But a lot of very interesting things are happening and I am learning a lot about the Egyptian Revolution. Yesterday's marathon day session only welcomed the Egyptian audience, and included an evening meeting with the independent trade unions, which was enlightening. But more about this later.

The highlight of my day happened at night. From the balcony of my hotel room I can see Tahrir square. I can also hear it. That's how I noticed the demonstration that was taking place there, around 11 pm. I decided to go and see what it was about. 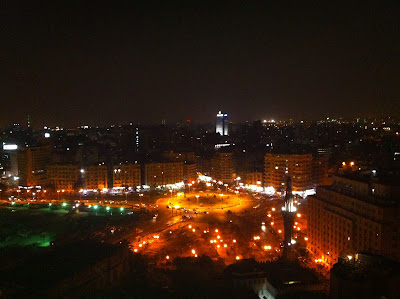 Tahrir square at night
A few hundred people were assembled at the corner of Tal`at Harb, chanting anti sectarian slogans and some were brandishing crosses and qur'ans.  They were protesting the sad events that took place in the Imbaba neighborhood between "salafis" and Copts and which left at least 10 dead and hundreds of wounded. Everywhere I had gone that day people were talking of a conspiracy to drag the revolution into sectarianism.

There was one flag that
was carried during the protest, alongside the Egyptian flag. It was the
Palestinian flag. And the chants of the protesters reflected this very clearly, with at least half of them directed at the zionists and their agents in the Arab World. I also found there posters calling for the Egyptian Return to Palestine March, and the people I asked were all aware of it and were intent on participating. 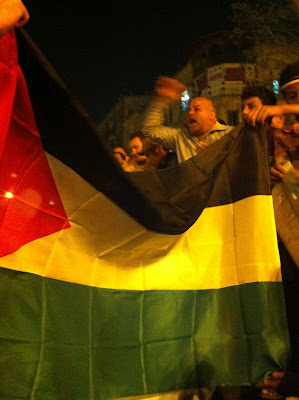 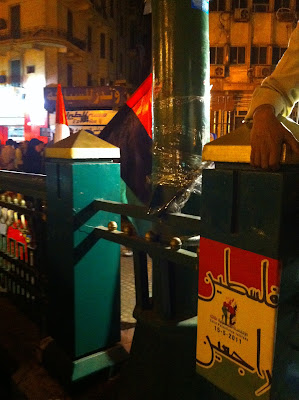 I infrequently say this Rami, but I really appreciate your blog and your work.

I envy you Rami.. I've always loved Egypt,, and after January 25th, I learned to love it even more... it's been ten years for me since the last time I was there. But while reading your post, I could smell the Nile, the good hearted simple people there,, I could feel Egypt's Freedom. I CAN SEE PALESTINE'S FREEDOM SOOOO NEAR..
come back safe.. you're missed

Glad the world bank was at least able to offer an opportunity to experience egypt and its new, perpahs still troublesome, reality. tahya al thawra!