This woman (and Egypt) kicks ass 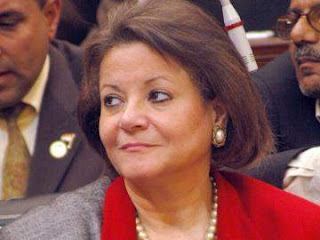 
The government has declined a loan from the World Bank because it found the terms of the loan incompatible with the national interest, Egyptian Minister of Planning and International Cooperation Fayza Abul Naga said on Monday.
The minister added that the government would not accept conditions dictated by the World Bank or the International Monetary Fund, especially since the 18-day uprising that toppled former President Hosni Mubarak.
However, Abul Naga said the Saudi government has granted Egypt a loan of US$200 million to be directed to small and medium enterprises.
Last week, The Wall Street Journal said Egypt was wary of the United States’ recent offer of financial support, doubting possible ulterior motives behind it.
It also said Abul Naga had lodged a complaint with the US Embassy in Egypt, and warned of violating Egypt’s sovereignty by dictating conditions for loans. The complaint came in response to an announcement by the United States Agency for International Development that it would grant Egypt US$165 million to finance projects for education, civic activities and human rights.
Abul Naga objected to the agency announcing loans to Egypt without consulting competent Egyptian officials.
From Al Masry al youm http://www.almasryalyoum.com/en/node/469888
Posted by Rami Zurayk at 10:54 PM