From Rafah: denied entry- the limits to revolution

From Rafah: Denied Entry- The Limits To Revolution
By Ann Gough for Land and People 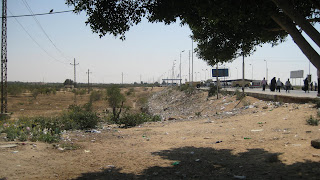 While the revolution in Tahrir is fighting against its fragmentation and for its original goal, the revolution seems to have never arrived on the Egyptian side of Rafah. Snarling, corrupt and brutal gatekeepers of Palestine, the Egyptians at the Rafah border could not be more invested in the Israeli / U.S. occupation of their country. A combination of fear and greed grips the border crossing. A microcosm of late capitalism in its militant entrepreneurialism.

“All Palestinians are donkeys” is a refrain we heard many times in Arabic and English from Egyptian officials at the border. The border police eat and drink and watch elderly or desperate Gazans try to get in and out while poor Egyptians badger them for shekels or guineas as payment for throwing their luggage over the bars of the Rafah gates. Fights break out between the porters over access to customers. One pushes an elderly Gazan man over a delayed currency exchange. The golden rule under hypercapitalist dictatorships abounds in “Rafah Land” – every human interaction has a price. Including a place in line or a place to sit. Even a wheelchair is available for purchase, to transport the lucky Gazans with medical permissions who are allowed out of the gates.

A Norwegian couple waits anxiously outside the crossing. He was born in Gaza but has been living the last decades in Norway with his Norwegian wife and family. They are near tears. For months they have been planning this trip and coordinating with the Egyptian embassy in Norway for permissions and visas. With everything set, they arrived at Rafah only to be told no. For hours they wait and beg the border guards. They have a flat, she tells me, in Gaza. They bought it after the Oslo interim accords, when everybody had hope. When they finally received the permission from the Egyptian embassy in Oslo they cried. For six years they have not seen his family, his mother died in that time. Their daughter in Norway has the Egyptian embassy in Oslo call their cell phone. They hand the phone to the Egyptian manager of the crossing and after another 45 minutes they are allowed through. Their elation is palpable. They waited 4 hours to cross through the gates.

We are still denied. Another international natters away to me about “peace journalism” and the importance of the peace movement in solving this “conflict”. I wonder if Gazans feel that they are parties to a “conflict”. Do Egyptians block Israelis from leaving? Are Israelis exiting through Al Aqaba with medical permissions? Perhaps we should be talking about the Gaza prison, not the Gaza “conflict”.

There is much chatter among the Egyptians and we are offered a tunnel trip for 200 U.S. dollars per person. In a back room of the nearby shop, we are told to pay upfront and we will be taken to the tunnels. Considering that these are the same people serving tea to the Egyptian border police, it seems at best a scam.

A United Nations jeep and bus pulls up to the Rafah crossing. United Nations – surely they will want to help two internationals with full paperwork and invitations from a Gaza based civil society organization. “Ahh, they won’t let you in because you are Americans and you will be targeted” the blonde UN official tells us while her Egyptian driver tries to close her car window and shoo us away.

We will be targeted in Gaza? A conservative sheik has just welcomed us. “They won’t let you in? It is my country and I say Ahlan wa Sahlen!” he says in perfect English. We tell him we are going to study land and farming and he opens his arms, please come.

If we are targeted at all, it is by the Egyptian secret police or perhaps the Israelis. The UN official is transporting VIPS through Rafah and she tells us that if we are not being allowed in it is because the Israelis see everything and everyone that goes through Rafah. She goes only to Gaza for an hour. She will stay in an Al Arish seaside resort before her Egyptian driver returns her to her UN office. UNRWA, meanwhile, claims not to have funds for its vital Food Aid programs.

Now the Egyptian army office is demanding to speak to our embassy. He wants some kind of proof of coordination. Over the next hours his wants will jump from mukhabarat coordination to our embassy to the Egyptian Foreign Ministry. But we try with the embassy. We paid 50 dollars for affidavits describing our understanding the U.S. embassy can offer no “help” once we cross into Gaza. So we call. They take calls only between 1-3 in the afternoon. Finally we make contact with a human voice. No. They refuse to talk with the Egyptians. This is not part of their services, they tell us. But we are still in Egypt! We insist. “Just talk to him, tell us we did everything we could – we paid for your affidavit and that is all you will do for us.” No. They will not speak to the Egyptian officer. We end the call screaming. “We are citizens of the U.S. and you will not help us in Egypt! We are not even in Gaza. Your affidavit is a lie.”

We end our eight-hour Rafah wait with a young Egyptian man. “This is my country,” he tells us, “I should be allowed through any border of my country. These are our brothers and sisters in Gaza and we want to visit them”. He has brought proof of his Egyptian army certificate to show the Rafah border police. In the end, he and his uncle are not allowed in. VIPS from the UN can visit Gaza but Egyptians cannot visit their neighbors.

One Gaza man has waited for 23 days at the crossing to visit his family. He can’t get in and the Egyptians won’t let his family out. Two men from Gaza run to the gates. It is five minutes after the Egyptian side closes. They are not allowed to return home for the night. So much for the openness of Rafah. Like the Greek myth this gate is guarded by a kind of Cerberus, a three-headed dog. But these dogs don’t guard Hades – rather they guard an isolated strip of land. According to the Gazans leaving it is a beautiful place and it is their home. One man taking his father to hospital proudly shows his Palestinian passport to me. Look, “I was born in Gaza.” “Helou, Gaza” his father says.

We spent only one and a half days waiting at Rafah. Palestinians spend days on either side of the crossing, waiting to get in or out. Egypt maintains a strict quota of 400 people / day allowed to leave Gaza. Patients are dying, students denied opportunities to study and families separated. To what end?

Of course the true dogs of Rafah are the U.S. policy makers. Ever loyal to Israel, they cultivate carefully Gaza’s continued isolation. Ensuring the longevity of the occupation by outsourcing responsibility to Egypt and the UN. So Gaza remains, in view but off limits. But the revolution that ousted Mubarak was one of the most courageous in recent years. And it brought to the forefront the years of organizing in Egypt during the first and second Palestinian intifadas. The Egyptian state certainly bares some responsibility for the siege on Gaza. It is time now for their army to act on the promise of the revolution. Open the Rafah crossing, end the faux “peace” accord with the Israeli state. Do this, or get out of the way. Because the next Return to Palestine will include Egypt and we will all simply get up and walk to Gaza, through and around the Rafah gate.
Posted by Rami Zurayk at 12:56 PM