Tahrir/Cairo. July heats up: our revolution has been stolen

Tahrir, July 2011
By Anne Gough
Special to Land and People 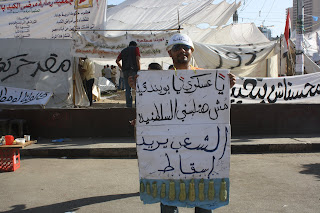 After the people of Egypt successfully ousted Mubarak much of the English language foreign press wrote that the organizers of the revolution were satiated with the result. They were willing to let Tantawi and his military council assume control.
Not the case.
“Our revolution has been stolen” and “it is not Mubarak but it is the same system as Mubarak” are among the most common phrases heard in Tahrir today.
The organization from the peak days of the uprising is still apparent; people have cordoned off the square and politely ask for I.D.s and check bags of those who want to enter. Far from an obtrusive checkpoint (for that one need only visit the U.S. embassy a few blocks away), they only want to know who is entering their space and what they are bringing in. People wanted to speak with us, about the U.S. where we are from, about our views of the revolution and about the situation in Lebanon, where we are living.
Pride in the revolution is still apparent but many people told us that they are less then hopeful for a real change in Egypt. Primarily because political power is still within in the hands of the same people. While the power that changed the world back in January is slowly dwindling away. One man from Luxor, holding his handmade Kusa / corruption poster, warned that if the U.S. does not start to follow what its leaders preach then it will be finished. Meaning, he said, that its only friends will be the small group of powerful and corrupt Egyptian families, not those in the street. As one man in Tahrir says, “In the U.S. you have the illusion of choice.” Political and media choices in the U.S. are increasingly fabricated and increasingly the same. In Egypt, he went on, “we want to have real choices and to make real decisions about our land and future.”
In another capital the media empire of Rupert Murdoch is crumbling. Murdoch, whose populist ideology of racism, islamophobia and unbridled neoliberalism, controls much of the English media. What they write and what they dare to cover. Don’t be fooled by the notion that NewsCorp is “publically traded” company, it is hereditary dictatorship. A media version of Mubarak, Murdoch rules with impunity over a feudal and corrupt corporation. Incidentally, he seeks to expand to the Arab world. The man who says, "They [Muslims] are much harder to integrate into a community than the average Indian or Chinese or Japanese even".  John Berger wrote about the media dictators like Murdoch. “Any tyranny’s manipulation of the media is an index of its fears. The present one lives in fear of the world’s desperation.”
So the Egyptian revolution continues, under-covered by international media. As we walked through Tahrir we thanked the people we met and said that we hoped to learn from them. After nodding in agreement, one man turned around and said, “If you feel that way, then do the same in your country”.
Posted by Rami Zurayk at 9:44 AM

Mubarak's regime is just an extension of the corruptes authoritarian military rule which had Egypt in its paws since the 1952 Coup D'etat (erronously referred to as 'July revolution.')

This is THE first true people's revolution in Egyptian modern history since 1919. We hope and pray that we can see it to completion.