Nearly 3 years ago, my dear friend Yasmine Ryan published this article in Scoop about land and land rights in Sinay, my village in Jabal `Amel. In a nutshell she said that the feudal past of the village makes it such tat the people who work the land do not own it. Instead, it belongs to absentee landlords. She echoed the concerns of local people who asked themselves, back then: "what would happen if the absentee landlords sell the land and we get evicted from it? We have been using it for centuries to produce our food and fodder and to construct our livelihoods, But we have no rights over it. We will have nothing left but migration".
Well this year, their worries have become reality: a parcel of more than 2 km2 of farmland was sold to one investor who has kindly asked the farmers of Sinay to stop using the land and who has placed barbed wire and made investments in intensive banana farming under covered structures. The farmland of Sinay has dropped by one third, and about that many farmers have stopped working the land: "It does not make sense anymore to toil when the land can be taken from you any day" one of them told me.
This is what the landscape in Sinay looks like: extensive cereal and olive cropping on rolling hills of marly limestone soil 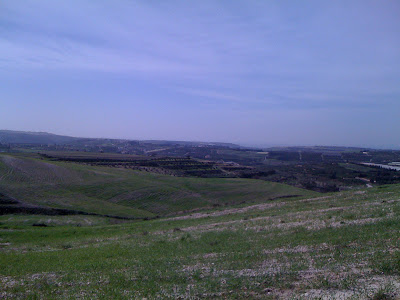 And this is what they are turning it into: Plastic houses with cash crops intensively farmed on soils substrate transported from the coast to cover the marl 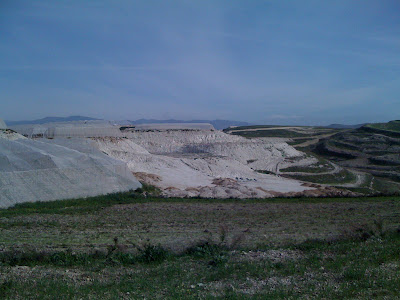 Below is how I want to remember it: The Shawamer (Land of the Wild Fennel), the olive groves that once belonged to my grand father. My uncle still owns a small part, the non terraced plot on the left of the picture. Here they could own because it is in the cadastral zone of Ansar, the adjacent town. Ownership was impossible in Sinai for a very long time because the parcels were too large and hence not affordable to farmers. 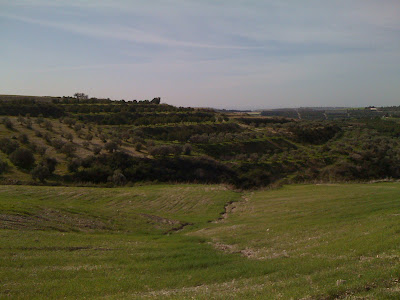 Hey Rami,
this is interesting. Do farmers stop working the land due to risk of expropraition only? Those that do farm, can they sell their produce? How come this risk of expropriation only now causes farmers to stop tilling? What has changed from say 10 years ago? Why would landlords not have sold than?
How are you?
Karin

It would be interesting to explore within this rural context the process of land subdivisions, at the origin. We know that in urban areas usually developers subdivide the land, but in rural areas of Lebanon, there is less info about the process, which i think explains well the current socio-economic trends of the area.

Karin: Every year, farmers from my family threaten to stop planting because of the low returns, but they eventually continue to do it, for many many reasons, too long to go into here. They can sell, but a lot is used locally as many have cows which they feed on the hay, and they make their own burghul, which is a staple. The risk of expropriation did not make them stop, it is the actual request to vacate the land that did.

Lana: You are right, it is extremely interesting. Lebanon is one of the most unequal in terms of access to land: 50% of the land is owned by 0.1% of the people.The rest is divided among the others, in parcels that keep decreasing in size. This is called "bifurcation in the patterns of landholdings" and has been shown to be one of the main causes of political violence in the Middle East