I went today with my friend Tanya (who is also the brilliant photographer of our forthcoming book on Lebanon's food trail- see a sample here) to Ham, a small village lost in the confines of the Anti Lebanon mountain chain. We were looking for salamouni wheat, an old wheat variety that is still grown in this part of the country. You can read about salamouni here. It is one of the oldest bread and burghul wheat varieties in Lebanon, and Ham, because of its remote location, acts like a living museum of traditional land races.

If you look closely at the map above, you will see that Ham is very close to Syria. In fact, it is located in this sort of peninsula that protrudes into Syrian territory, and for the longest time this Lebanese village was only accessible through...Syria. Eventually, the Lebanese government opened a mountain road from Baalbak, which people only took in case on force majeure due to the frequent highway robberies. I was told that no one would dare take that road with 50 liras (30 cents) in their pocket. Recently, the local people themselves opened a much shorter road linking their village to the west to Khraybeh, Al Khodor and Sifri. The road does not appear on the touristic maps of the country, but it is much shorter and safer. Getting there is easier now: drive towards Baalbak and take the first road to the east after the AUB farm (Hwash Sneid) roundabout. Then drive straight to Ham.

I asked what did people do for a living, and the answer was straight forward: what do you want people who live so close to Syria do? Smuggle, of course! The goods they smuggle vary with the vagaries of the global economy. Nowadays, they export second hand or unbranded shoes and clothes bought in bulk, usually from the US, and import diesel fuel, which is subsidized in Syria. Of course smuggling is highly punishable in Syria and Lebanon and they can lose their lives if they do not grease the right hand. It did look as if they knew whose hand to grease, because the village, in spite of the omnipresent smell of mazout, seemed to be doing OK. The only serious losses in lives they recount were inflicted by the Israeli drones during the July 2006 bombing campaign. They chased the mazout smugglers and killed 5 of them in 2 separate incidents.

However, and as in many other border towns (such as `Arsal to the north of Baalbak, where I have done research for 12 years), people reinvest part of the cash they earn from smuggling into the land. Ham (which is located at 1,500 m altitude) is blessed with a number of springs exploding from the flanks of the mountain. The soil is fertile in the flat depression surrounding the village, and you can see all sort of fruit trees and vegetables: apples, pears, apricots, cherries, tomatoes and lettuce. There are even huge walnut and poplar trees, a further indication of the richness in water. But water is limited to a couple of hundred hectares in an elevated plain. The rest of the extensive village lands is rugged, parched and dry. This environment, however, is very favorable to wheat production: the highlands are the salamouni lands. 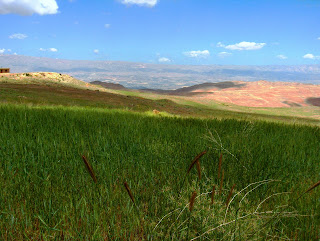 Together with Rifaat, a young farmer with diverse other occupations, we climbed to 1,800 m to look for the wheat fields. Unlike elsewhere in Lebanon where most of the wheat has already been harvested, Rifaat's fields were still green. He told me that there are 2 kinds of salamouni: the white, also called Breiji, used for burghul and bread and the red type, from which only fine burghul is made. 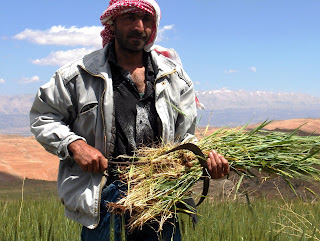 We harvested a few armfuls of green wheat for roasting later, and made our way back to the village where his mum, the fierce Umm `Ali baked for us delicious tannur bread made with salamouni flour. She also made fabulous kishk pies, but we ate them faster than I could press the shutter button on my camera (by the way all photos are mine. Tanya's are real photos, like art).

We took the new road on the way back, and in the village of Al Khodor (Arabic name for St. George, the dragon slayer) I was stopped by this stunning field of khatmiyyeh (marshmallow plant). Khatmiyyed grows wild almost everywhere in Lebanon, requires little or no irrigation, and is used in the traditional Lebanese and Damascene (Shami) tisane (zhourat). In spring, you can see large numbers of people harvesting the purple or white flowers from the wild, but this is the first time I see it planted and irrigated as a crop. An aromatic plants entrepreneur in Al Khodor. I'll keep this in mind. 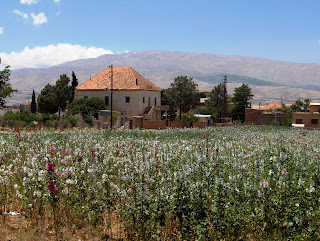 There is a part of the marshmallow plant, I believe the root, which when boiled in a tisane is used to treat urinary tract infections. Uva Ursi is also good for this. Works faster and better than antibiotic.