From the plain to the souk 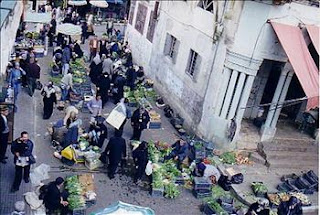 I am fond of farmer's markets. The Nabatiyyeh Souk is one of the oldest farmer's and producer's markets in Lebanon. It is still held every monday in the southern town of Nabatiyyeh, where, I have learned today from this article in Al Safir, it is called souk ahl Kfarroummane, or the market of the people from Kfarroummane. The village of Kfarroummane is adjacent to Nabatiyyeh and has become one of its suburbs. But the farmlands of the village include the extensive Maidaneh plain (the plain of the minaret), which extends over several hundreds of hectares of very fertile lands. What makes Maidaneh special is that unlike the rest of this very dry region, it is irrigated from a small river, the Zuraykoun, and from a number of springs. Maidaneh was the main food production zone of the Nabatiyyeh region, and it had endless citrus groves along with walnut orchards and extensive vegetables production. Between 1982 and 2000 the Israeli prevented anyone from entering the area. They burned all the orchards and turned the plain into a desert. After the liberation of the south in 2000, the people of Kfarroummane went back to Maidaneh, cleared it from unexploded shells and mines, and replanted it again with fruit trees, wheat, walnuts and all sorts of vegetables including the curious purple carrot that I have only seen there.
Posted by Rami Zurayk at 7:31 AM

So is the name of the river Zuraykoun related to your name?

The story of the Israelis burning the plain makes my liver hurt. THe only way I can stand it is turn to God.

nice
show us some pictures,please