Notes on the Lebanese terroir 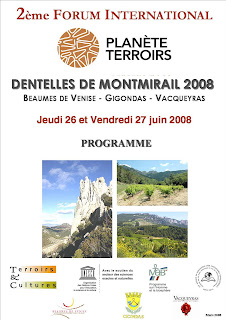 This is the conference I was attending in France. I gave a talk (in French) on "The Lebanese terroir: cradle of elitist products or/and local development tool?". Here's an approximate translation of my talk:

Lebanon, unfortunately, needs little introduction. The country's unending wars has been heavily mediatized, to such an extent that the mere mention of the word "Lebanon" appears to elicit dramatic images of war, violence and destruction. Many of those I have met at this forum have told me, with a lot of empathy: "poor Lebanon".

A very appropriate description, because Lebanon is indeed a poor country.

According to a recent UNDP study, up to 40% of the Lebanese can be categorized as poor, with around 18% living in absolute poverty. Economic inequality is severe, especially in terms of access to resources: the GINI for land distribution is 68%, one of the highest in the world. 50% of the farmland is owned by just 3.5% of the farmers, usually absentee landlords uninterested in farming. About 10% of the people are rural, but in the poor districts like the Akkar in the north of the country, this can climb up to 70%. Poverty is mainly rural. Agriculture's share of the GNP is 6-8% but it is allocated less than 1% of the national budget, for reasons I will not go into right now.

Lebanon imports 80% of what it eats, mostly from the US and the EU. We are self sufficient in fruits and vegetables and in poultry, but we import nearly all the poultry feed, which places "self sufficiency" in a different context. Lebanon is one of the centers of origin of wheat, but it imports 80% of the wheat it consumes.

Lebanese cuisine, unlike Lebanese agriculture, is thriving, and this may well be the last chance of the farm sector. There are 3 cuisines in Lebanon: a street cuisine, a restaurant cuisine, and a home cuisine. Most of those whose eyes lit in this room at the mention of Lebanese food will have probably only ever tasted the street food and the restaurant food.

The 3 cuisines use a lot of traditional products. I say "traditional" not "terroir", because the notion of terroir as defined by this conference does not fully apply to all of these products. This is an issue that should later on be brought to discussion. However, in the rest of this talk, I will use the 2 terms interchangeably. Examples of these products include burghul, which has become an international product, some dairy products such as kishik, darfiyeh cheese and labneh, some breads such as markquq and tannur, molasses, flower distillates, and fat-preserved meat, qawarma. One must note, however, that all these products are common to the Levant, especially regions of Syria, Lebanon, and Palestine.

Both rich and poor eat these products. In Lebanon, we do not organize conferences to save the terroir, we do not talk about it much; we just eat it. We figure this is the best way of preserving it. However, as the concepts of terroir and its association with fine foods and gastronomy evolves, the prices of some products is increasing. There are concerns that the prices may reach a point where they will only become accessible to the rich, and that the producers themselves will have to eat lower quality products in order to maximize cash income. In other words, our interest in terroir products may render them elitist. We need to devise ways to avoid falling into this trap.

Recently, a number of internationally funded projects have started to gather knowledge about Lebanon's traditional foods and to organize it in a way that is accessible to a wider audience, with a view to eventually use this information in rural development. The Geographic Indicators project funded by the Swiss government has identified more than 40 products of local renown and has carried out extensive studies on a handful of them. The Slow Food/ AUB project funded by the Italian government has created a database of 25 terroir products. More recently, the CIHEAM, with Italian government funds, has contributed to the publication of a Lebanese Traditional Food Atlas in both Arabic and English. Concurrently, the Italian government has also funded the creation of Earth Markets, which, in addition to existing outlets such as Souk el Tayeb, have contributed to creating an additional outlet for the marketing of some of these products.

The problem, however, remains to make the leap from studies and inventories to the use of the terroir products as catalysts of rural development and as a tool to close the inequalities gap. This is a process which, I believe, cannot be helped by donor's money. There are several reasons for that: one is the inherently short-term nature of donor funding which contradicts the long-term nature of the development process. Another is that donor-led projects are often very rigid while development requires tremendous flexibility and adaptability to very fluid conditions. These are classical problems to which more specific problems can be added such as the competence of international and local development staff, the political agendas of the players, and the amount of funds available.

If international development money is not the answer, then we will have to rely on local development effort, a "terroir" development. Those who have tried it (as I have) will tell you that they face, among others, the following problems:


Many of these problems can be linked to the fact that the Lebanese the state has, a long time ago, resigned from its duties. These include technology transfer and farm extension as well as legislations and their implementations. Instead, the Lebanese state has traditionally relied on the private sector for catalyzing economic development. While this can lead to the accumulation of wealth, usually in the hands of a few, experience in Lebanon and elsewhere shows that the private sector rarely serves to improve the situation of the most vulnerable.

It appears from the experience we are seeing in France and in other countries, that the terroir, which was created by local men and women, needs an effective state structure in order to develop and to compensate those who have maintained it over the years. But not just any state: a secular and fair state, an accountable state, a state for all its citizens. And this is where the real problem of preserving the Lebanese terroir might lie.
Posted by Rami Zurayk at 6:48 PM

Good talk. Considering all the subsidies given to agriculture in the West, farmers in a failed state must have a hard time.

I hope you brought back a couple of bottles from Gigondas.