With the goat herders 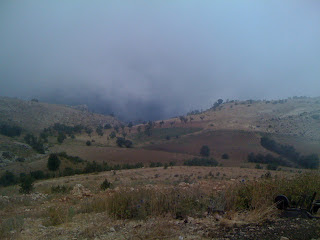 I went to a place close to paradise today. You access it through the Ehden Nature Reserve in North Lebanon, but it is effectively part of the Dinniyyeh area. It is just below the Qornet al Sawda, Lebanon's highest peak. To et there, you have to drive towards the nature reserve in Ehden, and then go into the "Aden" restaurant and drive through its parking for an hour off road before you get to Youssef al Doueihi's house, located at 2,200m altitude.

Youssef owns vast expanses of land in the area, and he keeps many many goats. So many that he doesn't know the exact number. Youssef makes the famous Darfieh goat cheese, which is maturated for a month in a goat skin. I will not talk anymore about the Darfieh cheese because you can check it out in my other blog "Traditional Lebanese Food" which links you to the Slow Food Beirut "Our Terroir" documents. 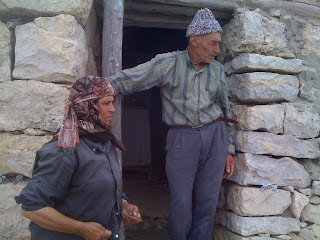 I want to use the space here to show some pictures of the area and of the Metwali family who help the Duwayhis and who share the house with them. They are from the Nasreddine famili, a very large tribe from the Hermel area, and according to Duwayhi, they have been his partners for over 25 years. "We tried to get rid of our Metwali", Duwayhi's wife told me jokingly, but she would not leave. "We are tied together", she continued. 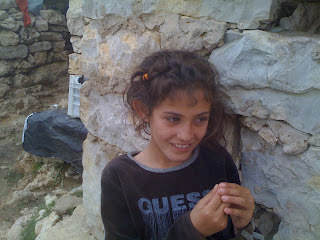 Two things are interesting here. One is that "Metwali" is a name given in Lebanon to the Shi`a. The Emir Harfush who fought with and then against Emir Fakhreddine who ruled Mount Lebanon in the 17th century. Harfush, who was later routed out of Lebanon, was called "The Emir of the Matawila" (plural of Metwali). The term later on fell into pejorative use as the Shi`a became the downtrodden low class of the country (which they are not anymore, but this is another story). As a result, the Shi`a from the Biqa` rejected the appellation and the term became almost exclusively used to denote the Shi`a of South Lebanon (Jabal `Amel) who were more placid. Today the term is still used pejoratively, although by far fewer people after the Resistance and Hizbullah. 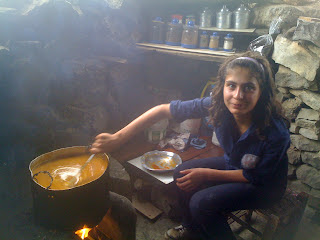 The other interesting thing is related to the business relationship between the two families. On my way there, I stopped at a crossroad to ask for my way. A teen ager guarding a large flock of goats gave me directions. I asked him if he was Duwayhi's son and he said he was Nasreddine's son. The two families are linked through the goat herd. Duwayhi probably bought the initial flock many years ago and hired the Nasreddine family to herd it. Usually, this means that the Nasreddine automatically acquire ownership of 50% of the goats, and of 50% of the revenues. They have to tend them and care for them and protect them from wild beasts and sickness, and milk them and provide them with extra forage when the pastures become poor. I did not ask about the specific relationship here, but Duwayhi kept referring to Nasreddine as "his partner". The Nasreddine granddaughter (photo) was helping around the house of Duwayhi, preparing the darfieh cheese and the apricot jam for the winter reserves (mouneh).

I see you are doing a lot of driving. Did you break a leg?

It is doubtfull Doueihi owns any of the land which must be a mashe'. He has just been using it for 25 years.

Synergies bet. the people of Hermel, Denniyeh and Jebbet Bsharreh are of the love/hate type. With water becoming scarce in the area, the hate element should come back with a vengeance.

I love these photos, too. We used to go visit an old fellow east of MIeh-Mieh whose house looked just like this; and he dressed like this guy, too. They also had goats. Now the area is all paved over I think, or Sitt Hariri has built a palace upon it. When we kids went there we just walked, it was only a kilometer or so east of Mieh-Mieh, but it felt like the wilderness.

My ex-husband's family (both Rum and Malkite Christians) has a lot of land in Marjayoun, right near the Jisr al-Khardali. His Uncle Foche (RIP) and other family elders used to talk about how in the old days there were "Arab" (i.e. Muslim bedu) transhumants who would bring their flocks into the big stone stables for the winter-- and by the end of winter there would be 2-3 feet, packed-down, of great fertilizer in the stables which they'd then use in the orchards and other farming functions.

That's another example of reciprocity/symbiosis between different social groups as together they husband and use the resources of the land. (Also, using winter animal excreta from barns is a good principle in biodynamic farming, anywhere.)