Two days of mini-civil war were sufficient to drown the city in garbage: The Lebanese are a nation of consumers, and they produce large quantities of solid waste. During the 1975-1991 wars, Beirut's rubbish was all disposed of on the seafront and in the sea, near what used to be the Normandy hotel and the place came to be known as the Normandy dump. During times of heavy fighting, piles of garbage would be left to rot at street corners, and when the stench became too strong, these piles would be set on fire, smothering the city with the characteristic smell of burning rubbish and filling our lungs and houses with poisonous smoke.

After 1991, solid waste disposal became a priority goal of the new republic, but alas only in Beirut. The operation of solid waste removal and disposal was subcontracted to Sukleen, a private company whose owner is close to the top politicians of the country. The p 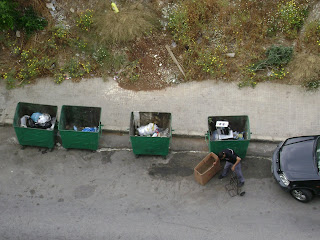 rocess for awarding the contracts as well as the costs of the contracts have all been severely criticized, and there were widespread accusation of corruption. The location of the solid waste disposal dump, in the Naameh area south of Beirut, as well as its design and its capacity have also come under fire. Yet, and while the rest of Lebanon's cities and villages are still awash with their own rubbish (because the state is not interested in anything aside from Beirut), the city (at least the central part of it) has become, in the past few years, cleaner than I have ever known it.

The system is simple and human intensive: People throw their garbage in large rectangular bins situated at street corners and the Sukleen trucks come and collect it on a very regular basis. But people are often careless, and throw their rubbish around the bins. Many do not close the bags properly. As a result, there is often as much garbage inside the bin as there is outside.

But the Beirutis have found another function for these bins: they use them to block roads whenever there are strikes or demonstrations. Their contents spill out, and the roads are closed to the collectors. Garbage accumulates again on street corners, and at these times, I can start smelling the burn again. This is what Beirut looked like yesterday. West Beirut is still unsure of what to make of the latest political developments. Although the army is said to have taken over the whole city, people are cautiously evaluating the situation behind the safety of their TV sets. There are occasional sounds of gunshots, but we are told it is in mourning as people bury their dead. The streets are empty, but they are clean. Another, silent army has deployed, clad in bright green: the Sukleen cleaners. Many come from India, Bengladesh, or Sri lanka, and they are here, in the middle of this conflict, to clean the Beiruti's mess. Like an army, they follow orders. Fear or disobedience means the loss of a much needed wage. I spoke in a combination of broken Arabic and English with Asam this morning, as he and his 2 colleagues were cleaning an empty street in Hamra. The 3 of them are from Madras, India. Two of them have been here 2 and a half year and one just 6 months. They are given $200 a month (the minimum wage in Lebanon), and health insurance, and they are all housed together (I couldn't tell how many to a room) in common sleeping quarters. He did not seem to be aware that the government has decreed a 40% increase in the minimum wage.

To those unsung heroes.
Posted by Rami Zurayk at 10:02 AM

Garbage is the most important issue of our time... because of what it takes to produce the garbage, as well as the effects of disposing of it.

I recently wrote in my blog that being rich is a sickness that harms the planet.

When I was a child visiting Mieh-Mieh, the garbage collector was a man in a mule-drawn cart; we gave him kitchen scraps. The rest of our trash went I don't know where. We didn't produce too much of it but there were Nido cans, juice boxes, popsicle wrappers and a few plastic bags. For a long time people used their orchards as rubbish tips - I suppose before the era of plastic and tin cans this was fine, because just about everything would decompose.

Now Sidon (and Naples) suffers from a terrible garbage crisis.

It takes being very, very rich to organize a recycling program; San Francisco (65% recycled), Oakland and other progressive West Coast cities recycle vast percentages of our waste stream, whereas New York can only manage 30%. Well, New york is rich but not as environmentally conscious I guess.

The real issue is to produce less garbage. In the States we're trying to fight back against bottled water, trying to get people to drink their municipal tap water. In Lebanon, the tap water is so compromised that this is not a practical solution. Yet plastic bottles are a plague upon the planet.

My father worked as a civil engineer for the water dept. in Lebanon in the early 60s so the low quality of Lebanon's water makes me sad. His dreams for Lebanon were disappointed in so many ways. And yet there's always hope. If Lebanon wanted to, she could invest in infrastructure (water and garbage) the way she has invested in tourist hotels.

Rami!!
I just discovered your site today thanks to As'ad Abu Khalil's blog.. I didn't know that you had it, it is just great and congrats from all my heart. You always inspire me energy !
Best Firas El-Amine


Just discovered your blog as well, thanks to A'saad. Nice posting.

Your blog is interesting and informative, especially on issues such as the crossroads of the political and cultural, the social and everyday life, and especially consumer culture and the problems that arise from 'lifestyle' living, such as garbage. I am interested in understanding the effects of neoliberalism on Lebanese society.

Rami, I agree that the Sukleen employees are 'unsung heroes' of the quality of city life in Beirut. However, at a broader level, the reliance on using imported migrant laborers who are extremely vulnerable to the importing contractor is a great social evil that should always be questioned. Especially when-- as in the case of the US occupation force in Iraq, or the Israelis in Israel and the West Bank, or the Lebanese government in Lebanon-- there are huge reserves of local laborers who under other circumstances would be happy to do these jobs for a basically decent wage but are for various reasons prevented from doing so.

Often, the barriers to employing these locally available people-- who in Israel and Lebanon are the Palestinians, and in Iraq are the Iraqis themselves-- are connected to long-running attempts to expropriate, pauperize, and punish these "locals" (term of choice in the west, nowadays, in place of the former "natives.")

We can also look at the European powers that imported enslaved Africans into the Americas while dispossessing and excluding the Native Americans from their lands and homes... or the European powers importing contract labor of various kinds (Malay/Indonesian, Indian, Chinese) into Africa for the same purposes.

These migrant laborers in Lebanon and other Arab countries today are so vulnerable to abuse! But evidently, all Arab countries-- like Israel-- prefer to use these limited-term contract workers from, usually, Asia rather than Palestinians or Egyptians or whereever who might demands basically decent work conditions and who would anyway have political resonance and connections within the employing countries and the region...

I really like how you mentioned a subject that I won't say rarely but never is spoken about. Good points, and thanks to those people, our city looks civilized and clean.
In hope, that we will have bins for recycling (easier to use, than the ones that were put 6 years ago). Sadly, when I throw out glass bottles and plastics and papers, i just have to put them with everything else, because there is nothing else that I can do with them. Except for paper, we do recycle them at work. Hopefully, more people will join us on this.

Helena, thank you for this analysis. Very, very good.