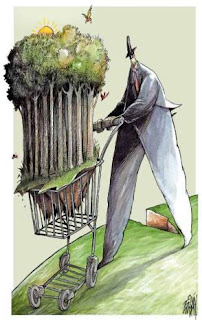 Al-Akhbar's front page article today was about the launch of the new Lebanese Green Party. They titled the article: "Armchair environmentalism". I don't have time to translate it, but if you read Arabic, its worth having a look. The political structure of the party is especially fascinating: it is closely "overseen" by Akram Chuhayyeb, a Jumblati politician; and while Chuhayyeb does not hold any official function in the Green party, some of his close aides do. The article also mentions that Ghassan Mukhaiber, a Metn MP and a member of the Aouni coalition, is also a member. The party wishes to be non-sectarian. But it also accepts (and apparently encourages) cross memberships, meaning that you can be a member of the Green party and of other (usually sectarian-this is Lebanon, remember) parties.
Posted by Rami Zurayk at 9:40 AM