From the Wall Street Journal, an article entitled: Mideast Turmoil: Made in America? You betcha as they say in the god old US of A

"In my column in today’s European edition of the WSJ, I’ve looked at the economic causes and possible consequences of the Middle Eastern political turmoil. The protests in Egypt, Tunisia and Jordan are all clearly rooted in deep political grievances against brutal dictatorships, but they have their origins in soaring food prices. The chart below from Absolute Strategy Research shows why: Egypt has one of the highest levels of spending on food as a proportion of total spending in the emerging markets. It is hardly surprising that huge rises in food prices should bring people out on to the streets. But the alarming thing from a global perspective is the number of other countries with similarly high levels of food spending, including nuclear powers such as Ukraine and Pakistan. If food prices carry on rising, we may see this turmoil spread. 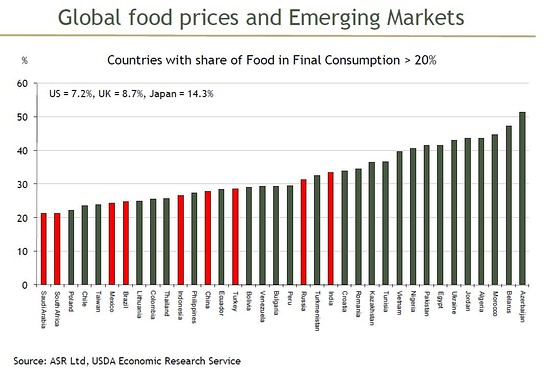