Walk through the city

I took a walk through West Beirut this morning to check on my parents who live in Moussaytbah (see the map below, my itinerary in yellow). On Sadat, near Smith's, and at the cross road with Hamra, there were a few damaged shop windows, but almost all shops were open. I encountered the first serious damage in the street perpendicular to Hamra, one that leads at one end to the Hariri residence-cum-bunker and at the other to the Mini 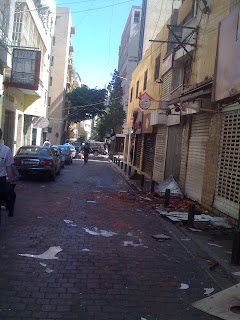 stry of Economy and Trade, where there was heavy Future Movement presence. There are signs that a battle took place in this street, and one of the shops and the floor above it have been hit with a Rocket Propelled Grenade (RPG). As I stood there, an army unit made up of several armored vehicles and a few 4x4 took position on Makdessi Street (army car in the picture, at the far end of the street). A bit further down Hamra, an unlucky shop owner was clearing his clothes shop that had been severely hit. The circulation in Hamra was not what I'd call "normal" for a Saturday morning, but it was pretty busy, and every other street walker was a foreign reporter, complete with multipocket vest and satellite dish-crowned van.

The rest of Hamra was normal bar the mounds of rubbish that had accumulated over the past 3 days. This city won't last one week if Sukleen stops collecting the rubbish. Luckily, the ubiquitous green trucks are back in action.

I walked up towards Zarif from the intersection near the old Al-Nahar building. I passed Zarif, and then got to Aisha Bakkar. This is an old, middle class, traditionally Sunni neighborhood, one of the oldest in the city. Most shops were open and trading. There were some signs of fighting, mostly bullet riddled cars. Further down, in Zaydaniyyed is where I started to see more damage: a couple of burnt cars, and a lot of bullet holes in walls and shop windows. At the intersection with Mar Elias street, a couple of unarmed men clad in Amal flags superman-style were closing the road with the (multi-purpose) rubbish disposal containers. I asked one of them why he was closing the road and he said, slightly startled, that there were skirmishes in Zarif (!).

I came back through Moussaytbah. The road was blocked near the house of the late Saeb Salam (old prime minister) and I took the street that runs from Sodeco-Bechara el Khoury, all the way to Mar Elias through the Malla area back to Zarif. This is where the fiercest battles took place: rubble, burnt cars, and broken glass all the way. I have marked it in thicker yellow on the map. In Malla, there was a Future Movement office: it has been burnt. 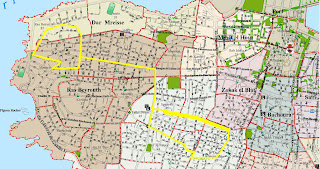 I had gone through all these areas without encountering one single person carrying visible weapons, although I did see a number of young and less young men grouped at street corners not looking particularity cool. By the time I got back to Zarif, there were two young armed men under a building where my friend lives. The same building has a Future TV relay antenna on the roof, and the top floor apartment belongs to the TV. My friend, who works for the TV told me that a group of armed men have taken over the apartment, that they caused damage to the installation, and that they questioned the 2 technical staff. They placed armed guards on the street, barely 200m from a Lebanese army field post. My friend tells me they are Hizbullah people. Another dark shameful spot on the Resistance's record. No one, NO ONE, has the right to shut down the media, and Hizbullah (or whoever, it is still Hizbullah's responsibility) is not allowed to occupy apartments, and certainly NOT in residential buildings.

Back in Hamra, cafes had opened and people were chilling out on the trottoir a couple of hundred meters away from the besieged Hariri guards in the Koreitem palace. I continued towards Rawcheh, and this is where I saw more armed men: SSNP militia. A group of 5 or 6 young men, with new guns and fatigues and clips, relaxing at a street corner, a few hundred meters away from their main office. Rawcheh looked desolate, dirty and damaged.

When I got home, I heard the bad news: Three men from Hizbullah had been kidnapped in Aley by Jumblat's goons and 2 of them had been executed. An armed man had shot at a group of mourners in the martyr's cemetery near Dahiyeh and killed 2. Members of the SSNP had been kidnapped in the North allegedly by Lebanese forces. By that time the streets where empty again
Posted by Rami Zurayk at 12:56 PM

Rami,
I am very pleased to find your blog. Your spirit and courage is an example to me.
Terry

Allah maak (even if there is no God)

My friend's building shows in your photograph. Glad she wasn't there.

Thanks for blogging, Rami. For someone stuck outside Lebanon (but inshallah coming soon), I find your accounts indispensable.

Rami, it breaks my heart to see Beirut and Lebanon are still on that horrible roller coaster. I was there with my late husband in about '94 to see the beginning of reconstruction and again with husband and kids in the summer of '99 to hear Placido Domingo sing at Beiteddine, when life was peaceful. Reading about fighting in Beirut simply hurts.

Rami, bravo for your detailed and courageous reports. You don't know how many people in my life have begun reading your blog this weekend... I am gratified. My cousin just read this piece and told me all about it. I also see links to Land and People everywhere.

Stay safe, and may your children weather this crisis with good humor and no ill effects.