This land is anti-capitalist land 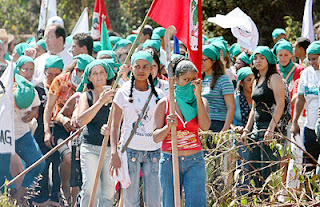 "Since the 16th century, when the Portuguese crown conceded vast “captaincies” to early colonists, land and power have been distributed unevenly in Brazil. Landlords exploited their tenants' labour and, after democracy arrived, harvested their votes. They often left vast tracts idle. The last agrarian census, conducted a decade ago, found that 1% of owners controlled 45% of farmland.

The (Rural Workers) movement has become Brazil's most polarising force. Those who regard it as a lawless threat to progress are as passionate as those who extol its championship of the downtrodden.

EVERY year in April groups who organise Brazil's rural poor, headed by the Landless Rural Workers' Movement (widely known as the MST), sponsor a nationwide bout of land invasions, takeovers of buildings and other protests. Part revolution and part ritual, “Red April” commemorates the killing 11 years ago of 19 landless protestors by police in the Amazonian state of Pará and promotes the martyrs' cause, the redistribution of land.

But nowadays much of the activism seems to have little to do with land reform. This year it included taking over highway toll booths in the southern state of Paraná. Last year a rural women's group destroyed a paper company's research laboratory. In the past the main targets were local land barons. More and more they are big companies, be they Brazilian or foreign, and the “development model” they represent."

Economist article on the Brazilian Roral Workers Movement's fight to end rural feudalism is becoming a political campaign against agribusiness. Just remember one thing: In Lebanon, land inequality is worse than in Brazil: 0.5% of the people own 50% of the arable land. If you dont believe me, ask the FAO. And read well the first paragraph. Then replace "Portuguese crown" with "Ottoman Empire", and "Brazil" with "Lebanon" (or Syria, or Turkey, or Iraq, or Palestine). Same history. But will the Lebanese move?