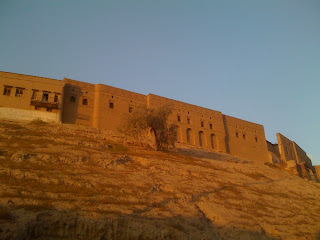 Erbil is a bit like a mini Sanaa (the capital of Yemen) that would have suddenly gotten rich. In a few years they have reconstructed, and in most cases just constructed, a reasonably efficien infrastructure with a very decent road network. There are houses and housing estate projects sprouting everywhere, but the architecture is not very nice. The rich businesses are located in "villages" near the ring road. These are really compounds with armed guards at the gate, and dozens of exactly similar houses, complete with large avenues and gardens. A few people live there too. Erbil has a flat topography and is built concentrically around the beautiful Erbil citadel, which is constructed with adobe bricks. The old quarter and the souk are located at the foot of the citadel. The mountains start a few km East of Erbil, and the foothills are gorgeous especially after the rain of the past few days. Below is a picture of the hills East of the city. 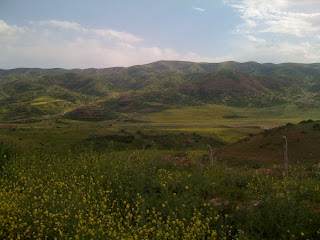 I tasted many foods, some of which were totally new, such as qaimach, which is kind of solid cream rolled into cylindrical shapes and eaten with bread and preferably covered with the syrupy purple mulberry jam they make locally. Qaimach is made by heating buffalo milk and shaving off the solid film that accumulates at the surface. It is served with milk around it and the taste is reminiscent of the immature buffalo mozarella that is still milky and oozes milk when cut open. The photo below is of qaimach. The same process is used to make sartou from sheep milk, but it comes as flat layers rather than rolls. Qaimach seems to be preferred by most. 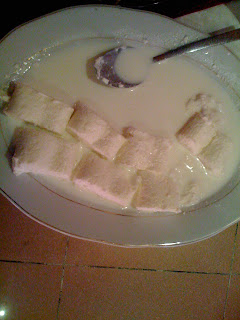 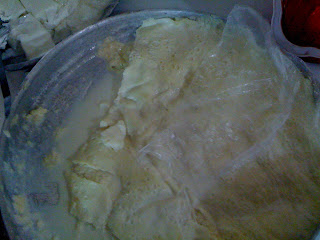 I also had many other cheeses, especially the jaji cheese, which I talked about yesterday and which is made very much like we make darfieh in Lebanon but with sheep milk. It is excellent, in fact better than darfieh. I took the picture below in the cheese market of the old souk. There are many jaji vendors, but connaisseurs told me this is the best one. He is holding the sheep skin, and the jaji cheese is at the bottom of the picture. They also sell kishk, which is dried yoghurt. It comes in balls, and the one they sell is made without burghul, unlike the one we make in Lebanon, but the trader told me they make the one with burghul for home consumption. 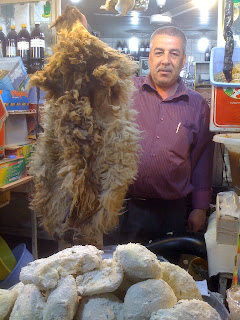 The cheese souk is fabulous, and one can buy plenty of cheeses and dairy products: whey, locally called laur, white cheese (Kurdi panir). Yoghurt (mast) is sold in metallic containers covered with cheese cloth. Below: kishk balls, next to US imported almonds. The imported almonds cost half as much as the local, small almonds which have a strong taste of cyanide. Good for the heart, the vendor told me. 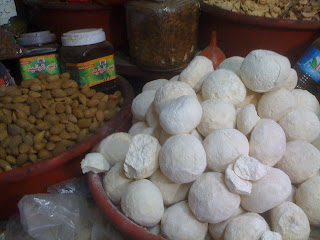 have you tried the "fume" laban from Erbil? quite a taste...
wonder how it is made!

Thanks for your response on chickpeas. can we discuss it when you get back from your trip?