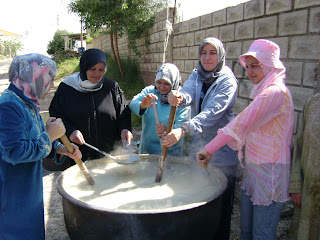 I have blogged about hreeseh a couple of times already, latest here. Today, the women from my extended family (cousins of my father) were making hreeseh in my village of Jabal `Amel in South Lebanon. They woke up at 2 am and set the wood fire under the brass cauldrons, and they took turns cooking the wheat and the chicken. This is how they make hreeseh:

The wheat and the chicken are cooked in 2 separate cauldrons. The women (it is almost exclusively made by women) start cooking about 14 hours before the hreeseh is to be eaten. First, the wheat is cooked until it becomes tender. The chicken is cooked at the same time (but only for a couple of hours) and the chicken stock is added to the wheat as the water evaporates. After around 6 hours, the wheat is soft enough to be mashed by 1 or 2 women, while the other 3 or 4 are still stirring (see below). 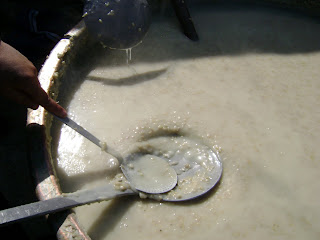 12 hours (and a couple of mature trees) later (around 2 pm), the (over) cooked chicken meat is added with the melted ghee and butter mixture. Some more mashing takes place, and the hreeseh is ready to be consumed and distributed. But before that, the majlis `aza has to take place.

Hreeseh is cooked in special occasions, usually religious ones. In Shi'a South Lebanon, it is in remembrance of the martyrdom of Hussein in Karbala, usually during the `Ashura, the first 10 days of the month of Muharram according to the Muslim calendar. During `Ashura, people organise a majlis `aza (a reception for condolences), during which prayers are read and the stories of the death of Hussein is recounted in chants. But people can also decide to have a majlis `aza anytime they wish. There was no special occasion today, my extended family just decided to remember 'ahl al bayt (the family of the Muhammad, but meaning mainly Ali, Hussein and Zaynab). So they cooked large quantities of hreeseh, had the majlis `aza, and when it was over they distributed hreeseh to the whole village.
Posted by Rami Zurayk at 8:12 PM

Wow, this is really beautiful. Thank you for sharing the pictures, recipe and story with us.

Best wishes of the day to you and your family, Rami.