I went to Little Aleppo again yesterday (Marach Street in Burj Hammoud) and here's what I found: 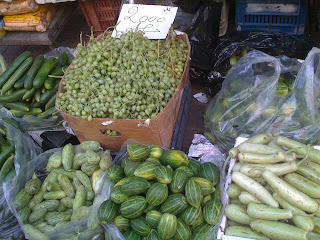 A strange small vegetable, a cucurbit which seems to be a mix of watermelon and snake cucumber (mu'ti) called `ajour. There are 2 kinds in the picture, a dark green with lines (center) and a smaller, paler kind. They are eaten in salad like cucumbers or mu'ti. I tried them and they're good. In the back of the picture are clusters of unripe grapes called husrom, eaten sour or used to make a sour juice for salad dressing and cooking. 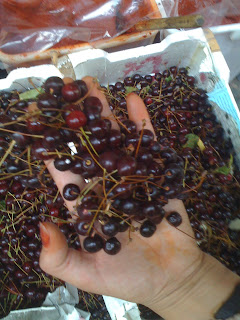 I also found these tiny sour tasting wild cherries. They are used for making a cherry sauce for the famous Halabi Kebab or for jams. I sampled the jam: that's how cherry jam should taste.
Both `ajour and the sour cherries are imported from Aleppo.
Posted by Rami Zurayk at 11:30 AM