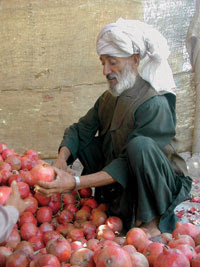 "After former NPR reporter Sarah Chayes reported on the fall of the Taliban in 2001, she decided to stay in Afghanistan as the country was being rebuilt. In 2005, she established the Arghand Cooperative, a business that sells local products for use in perfumes, soaps and food.

The author of The Punishment of Virtue: Inside Afghanistan After the Taliban, Chayes wrote about her experiences starting the cooperative and selling beauty products in December's Atlantic Monthly." (Thanks D.)

Great project, very nice article in Atlantic Monthly (I like this magazine). Read about her disappointment with corporate international development and how she eventually did the job herself. The project has lots of similarities with what Land and People does in South Lebanon after the Israeli war on Lebanon of July 2006. Except of course that we are locals helping locals, and that we have a tiny weeny budget. We help local southern women produce laurel oil soaps and traditional breads, but our sales are all in Lebanon. There is a reason for that, which is our commitment to foster short supply chains, and to keep the products affordable to the local people. But i think there is also a place for (fair) international trade and that we should be looking towards sending some of the stuff abroad, as it will contribute to further enhancing local livelihoods. My great fear is, in case things pick up, that these products start to be only manufactured for export, and that supply and demand will place them beyond the reach of the community that manufactures or produces them. Something to be thought about carefully.

One of my favorite parts of the article:

"To be fair, ALP/S was subject to the mercurial temper of its USAID masters. Chemonics employees complained that the agency kept moving the goalposts, a charge that one of them detailed in a letter written after he resigned in disgust and left Afghanistan. For months after the start of Chemonics’ contract, according to several former employees, it had been nearly impossible to hammer out even a basic plan to govern ALP/S activities because USAID kept changing its mind. And while the organization in charge of the crucial alternative-livelihoods dossier was treading water—at roughly $45,000 per month per person—the Afghan south was falling prey to resurgent Taliban and drug smuggling."

To listen to a 44 mins interview with Chayes, follow this link