The dry crescent: not good 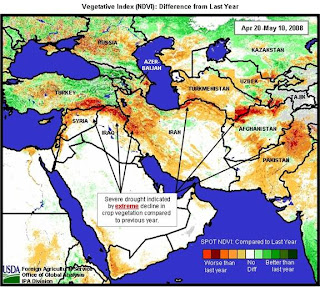 "The Middle East and Central Asia regions are currently in the grip of one of the worst droughts in recent history. Widespread failure of rain-fed grain crops occurred in 2008/09, as well as sizable declines in irrigated crop area and yield. Food grain production dropped to some of the lowest levels in decades, spurring governments to enact grain export bans and resulting in abnormally large region-wide grain imports. Should drought continue into the 2009/10 growing season which begins in October, even greater declines in grain production will occur as planted area for both rain-fed and irrigated crops will be severely restricted. A second year of severely reduced grain harvests would imply significantly increased regional grain import requirements as well as posing substantial threats to internal security in countries like Iraq, Afghanistan, and Pakistan. Afghanistan is the most vulnerable, owing to its lack of financial resources for large-scale grain imports and lack of institutional expertise to plan and execute such imports."

From the USDA Commodity Intelligence Report
Posted by Rami Zurayk at 7:13 PM