In the afternoon of June 1, I had to wear my "workshop president" hat and lead a group of 25 or so people through the meanders of the relationship between local tourism and the terroir. We started with a trip to the two nature reserves (in the making) and ended with a dinner "chez l'habitant" in one of the 6 "gites ruraux" of the area.

I am averse, in principle, to the over-inflation of the role of both ecotourism and terroir in the construction of rural livelihoods. I think they have a role to play, but that the negative aspects of both are clear when the scale increases to the level where, paradoxically, more people are involved and livelihoods affected. Among these impacts include: environmental impacts such as littering and detruction of habitats (look at the Himalaya), exploitation of local people, commoditization of products to respond to market pressure and the folklorization of people. We must also remember that the region of Chefchaouen is one of the prime producers of kif (cannabis) in Morocco, and that there is pressure from the Western countries to eradicate the cultivation--while there is pressure from citizen of these same countries (but especially Spain) to keep this culture alive. Governmental pressure is exerted through diplomatic power and promises of aid. Citizen pressure is exerted through local tourism and on-site consumption: the real terroir-tourism relationship is centered around the kif. Who's winning the battle? unclear, but we were told that the area cropped with cannabis had been reduced from 90,000ha to 60,000ha. But we also learned, that unlike all other rural areas in Morocco and in the world, the region of Chefchaouen had witnessed net demographic growth, indicating an amelioration of the livelihoods opportunities. We now know how the terroir can be a driver of local development.

This is how I started the talks about tourism and terroir. There was, predictably a brouhaha in the room, and a lively discussion ensued, during which I shared the experience of cannabis eradication in the Bekaa and the successive failures of the internationally funded programs. Others through in their experiences of the deleterious effects of local tourism on the environment, notably in Corsica. Many of the Moroccans among us took the line defending the kif replacement programs, pointing at the impacts of farming on land resources, and to the social impacts. From what I saw there is no more environmental impacts of kif on land than with any other production (and it is much less than the impacts of large scale export-tomato production in Souss for instance) but the social impact is certainly an issue. I could sense, from walking a lot in town and talking to people that there is a "class" of young men who may attach themselves to tourists or are just unemployed, who consume a lot of kif and who can show some aggressiveness, which is not within the general mood of the city. These, I was told, consume the resin of kif (like the hashish in Lebanon) and not the leaves which is what is traditionally consumed in a ritual that includes cutting them and mixing with tobacco and smoking in the pipes.

Some photo below. Can you spot the kif field? Click to enlarge. This was taken behind one of the women's coops we visited (yes they have those there too and they make exactly the same kind of stuff as elsewhere in the world: crochet tissue box covers and jams), about 50 meters from the main road. 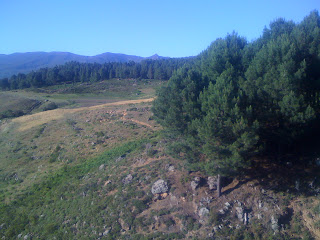 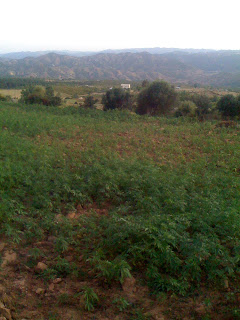 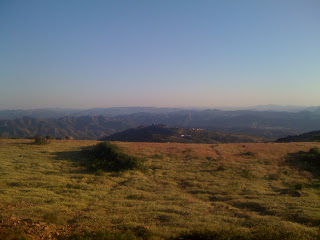 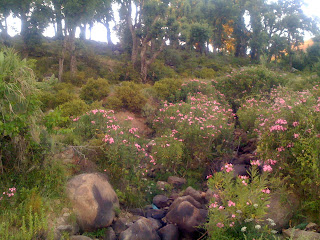 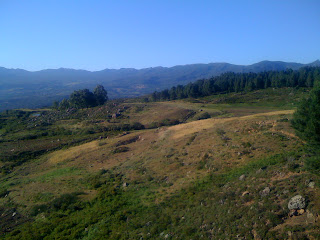