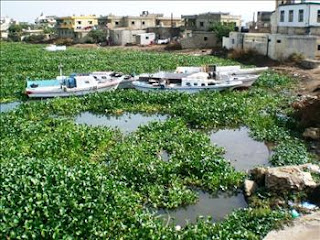 In al safir today, a brief story about how water hyacinth is invading the estuary of Nahr al kabir, the river delineating the border between Lebanon and Syria in North Lebanon. This is very interesting (in a sad way) because:

1) Water hyacinth is a tropical aquatic weed that is not native to Lebanon or to the Middle East. The nearest place where it is found would be the Nile. We are in presence of an invasive aquatic weed species, one that is quite damaging, and has been called "a floating nightmare": it blocks navigation, but also sunlight and oxygenation and can cause the death of aquatic organisms. There are world programs for the eradication of water hyacinth.

2) I really wonder where it has come from. Fifteen years ago, i became interested in natural wate water treatment systems (constructed wetlands). These are basically long trenches into which aquatic weeds are grown and where sewage enters at one end, and rellatively clean water exits at the other end. Water hyacinth is commonly used for this purpose because it is nutrient guzzler. I constructed pilot scale systems and looked for indigenous aquatic plants and used water hyacinth as a benchmark. The MSc Student working on the project (Charbel Rizk, his thesis is available through AUB library) obtained water hyacinth from somewhere near Jbeil, in a private garden where it was used for decoration (the blue flowers are very pretty). The systems worked decently with the local plants, and we avoided using WH because we were worried about the introduction of foreign species into the wild, and also because they were unable to survive winter: lebanon is not their natural habitat, and it is too cold for them, they all died in the AUB greenhouse. It looks now that they have evaded from somewhere, and that they have become more tolerant to cold, or that the weather has generally been warmer in the past few years. Are we witnessing some of the impacts of climate change?

3. Water hyacinth can only survive in nutrient rich environments. It shows very quickly signs of phosphorus deficiency. The best way of getting rid of it would be to stop using the river as a big sewer.
Posted by Rami Zurayk at 9:48 AM

Bas, ya ustaz, where do you think the money will come from for a sanitary system? Lebanon needs all its capital investment for new shopping malls, casinos, aquatic parks and luxury hotels! You don't want to hurt the tourism market do you?

Public funding of a sanitary system to clean up the river would look too much like socialism and offend the Americans.

No, keep on building enormous glass towers with Starbucks, Chevys and Ralph Lauren in the ground floors. Then wait for tourists to come fill up the rest of the space. Money! Capitalism! Hooray!

Pardon me for being bitter. I am going back to my positive affirmations for health now.

water hyacinth is a serious threat to aquatic life and should be taken seriously , and i agree with what the articale suggests that it has appeared in lebanon due to gloal warming. However,for curbing this problem the governament and other enviromental institions should take the right actions,some of which might be ,informing people of it's dangers,and having an environmentally friendly sewage system,that does not pour in the rivers.