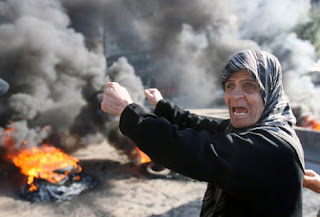 The culmination of the wheat crisis (I have blogged about its imminence too many times to link here, just write "wheat" into the search section) in Lebanon. As expected, the increase in world wheat prices coupled with the hoarding and the dishonesty of the mills cartel and of the bakeries cartel, topped up with the ineptitude of the government (or the "regime" as this article, which has an excellent analysis of the crisis, puts it) and its inability to deal with the issue has led to people taking to the street yesterday, in the southern suburbs, where bread has been making itself rare in the past two days. Read in the same article the description of the meeting that took place between Sami Haddad the able Minister of Economy and Trade (I am resisting the urge to write: Play it again Sam!) and the representatives of the various cartels. Du pur vaudeville. The "regime" eventually caved in and gave the mills and the bakery what they wanted: more subsidies. Our tax and debt money goes to subsidize rich and poor alike. Isn't that mad? Wouldn't it be better to increase the minimum wage and implement the anti cartel laws? Wouldn't it be better to increase the share of local wheat? We will still need to import, but at least bread flour, which is 30-35% of all wheat needs, could be covered locally. Let the cake eaters pay extra duties for imported flour. Many articles in the press today, including this one and this one and a different analysis in this one. for those who want the English version, but link is only valid for 7 days.

And last night my wife went out to get some Arabic bread. Could not find any, so we had French bread instead. It's not cake, but I'm no Louis XVI. Not yet at least.
Posted by Rami Zurayk at 3:01 PM